We would like to share with you the best places to eat 5 dishes that every Hanoi visitor must try.

You may know Pho is the most iconic meal in Hanoi but beyond that, the culinary capital of Vietnam has an incredibly diverse food scene and an array of street food that definitely can satisfy your taste buds!. By living in the old quarter of Hanoi for 23 years, I think I’m qualified to share with you guys best places to eat 5 dishes that every Hanoi visitor must try. 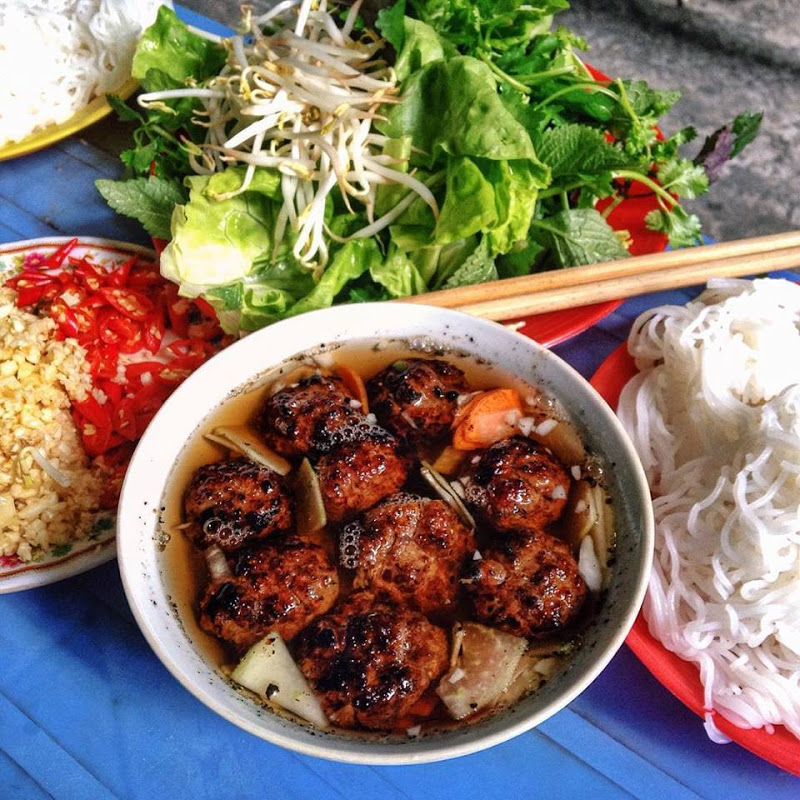 Bun cha is originated in Hanoi. It’s the reason why a similar dish called bun thit nuong exists everywhere else in Vietnam except Hanoi, where bun cha is dominant. It consists of charcoal-grilled fatty pork served in a bowl of fish sauce with pickled vegetables, garlic along with a side dish of white rice noodles and fresh leafy greens like lettuce, perilla, coriander and mint.

WHERE TO EAT BUN CHA IN HANOI?

– 74 Hang Quat street: A gem lying in the narrow alley with its simplicity will give you a feeling of being a local, they even have spring rolls to offer. Personally for us, the Bun Cha Obama is not good as this place – both atmosphere and the pork’s flavour. The opening hour is from 10am-2pm so make sure to be there on time to have lunch and you only have to pay 30.000 dong for 1 portion. 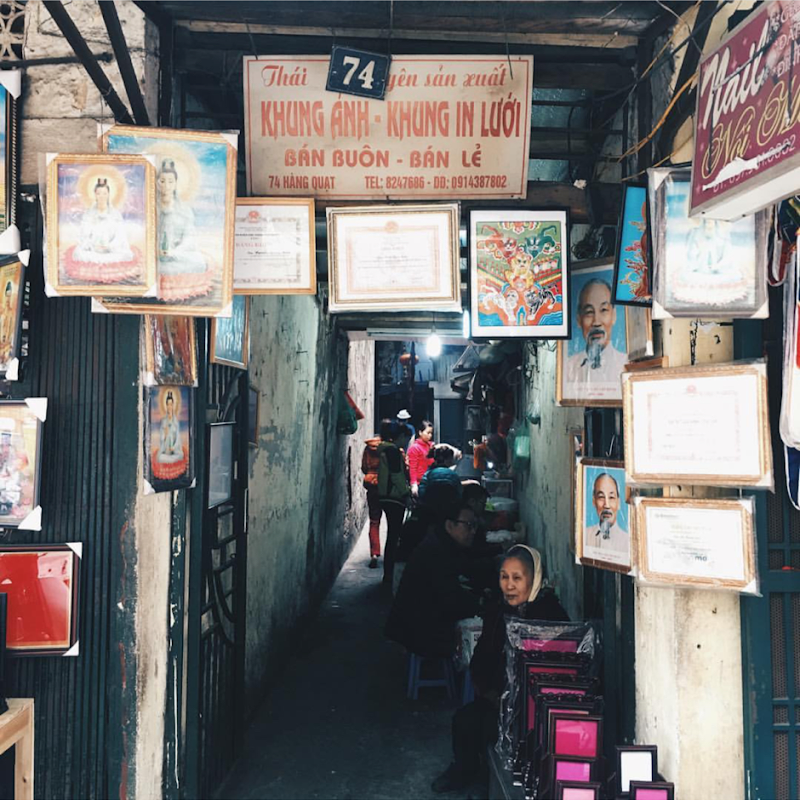 – 41 Cua Dong: Many people are addicted to the “bun cha” in this restaurant because of a unique difference: they grill the pork with wild betel leaf. The price is 50.000 dong, quite expensive but it’s a large portion. I’ll definitely recommend this restaurant to big eaters. 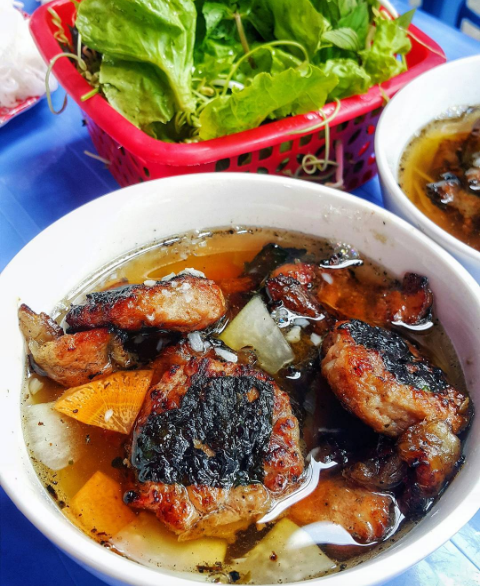 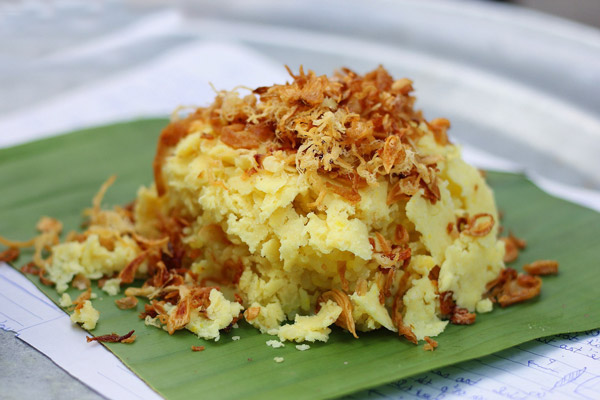 Xoi Xeo is the comfort food for Hanoi natives and it’s perfect for a quick breakfast. It starts with sticky rice cooked with mung bean and turmeric powder. The result is a distinct flavour and dense, bright yellow sticky rice which is then topped off with a spoon of deep fried shallots, its oil, sliced mung bean and pork floss.

WHERE TO EAT XOI XEO IN HANOI? 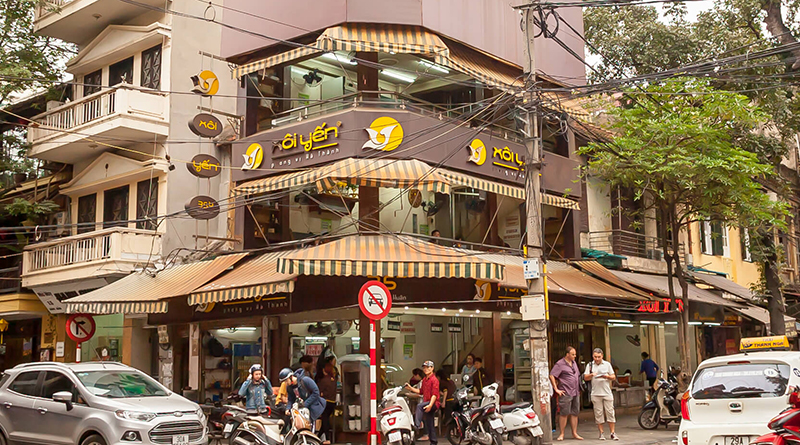 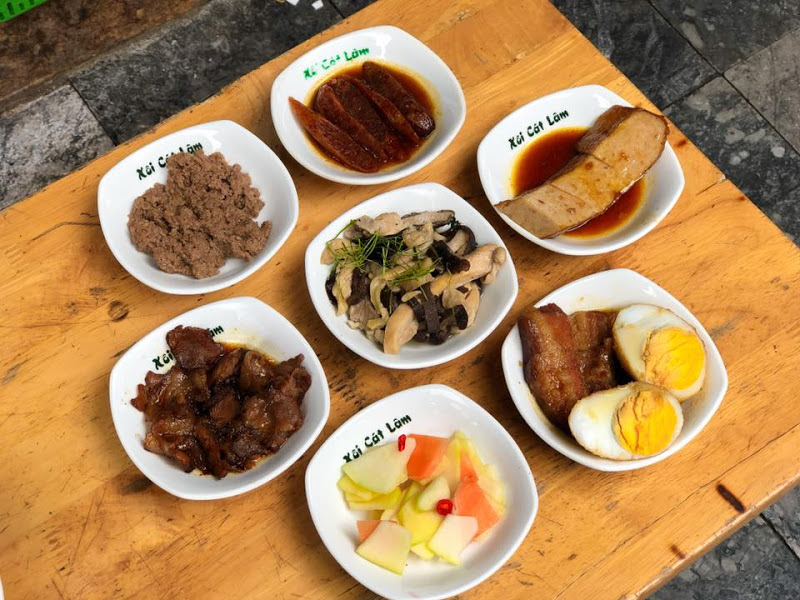 At these restaurants you can even customize your “xoi” by choosing a kind of sticky rice you want (they all cost 15k VND) and a wide range of toppings like: caramelized pork, Chinese sausage, pate, omelet egg and boiled chicken but to be honest I always eat xoi xeo without any toppings because “xoi xeo” in my mind is just “xoi xeo”… 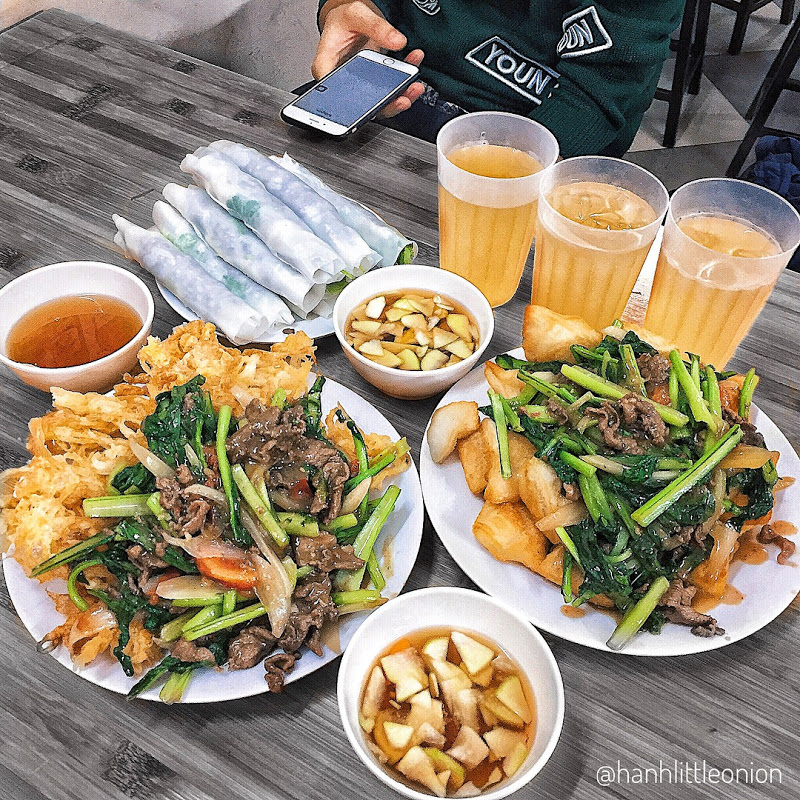 You may know pho from the Vietnamese noodle soup but pho actually means rice noodles. Pho cuon is basically all the ingredients of beef pho, but without the broth. It consists of strips of grilled beef and lots of herbs like cilantro, basil, and mint, all rolled up in a sheet of rice noodle. So instead of using a spoon and chopsticks, you just dip them in a bowl fish sauce and enjoy!

Pho chien phong  are squares of noodles that have been deep fried so they puff up into little donuts. They are then covered in beef, gravy, and sauteed vegetables. It looks like Vietnamese nachos but with no chips or cheese…

WHERE TO EAT PHO CUON IN HANOI? 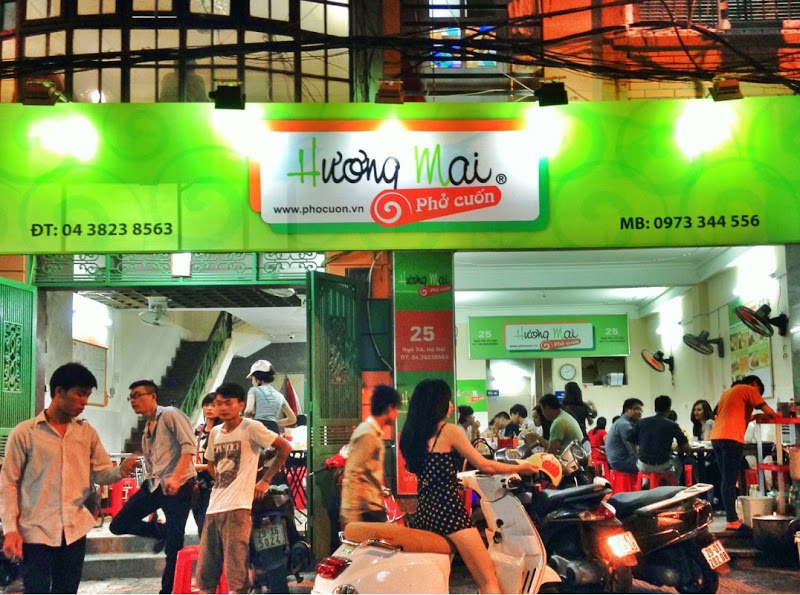 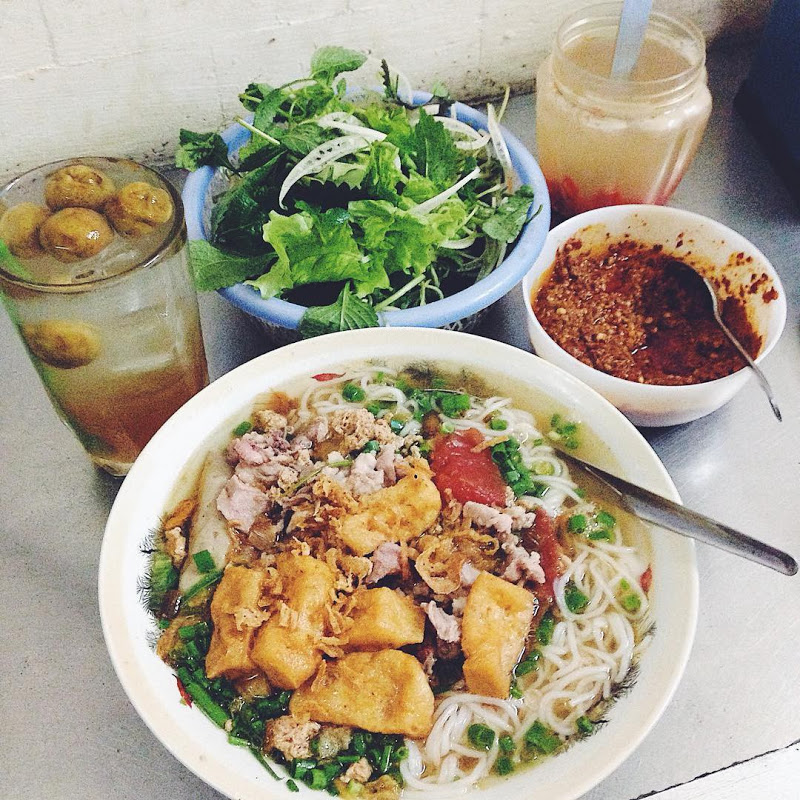 There are different types of “bun rieu” with various ingredients. But for Hanoians “bun rieu” is made with crab, tomatoes, pork, and tofu. It’s served with tomato broth and topped with freshwater crab( specifically rice paddy crabs),  which are pounded with the shell into a fine paste before being strained. The crab liquid is then used as a base for the soup with tomatoes, giving it a wonderful tangy flavor. Other ingredients for this dish include tamarind paste, fried tofu, deep fried shallots etc.

WHERE TO EAT BUN RIEU CUA IN HANOI?

-Bun rieu Co Hoan (14 Hang Luoc Str): It looks like a small restaurant at first but when you go through the alley you will be amazed by the in-house yard where the restaurant is located. You can add more toppings like vietnamese sausages, beef, cape mantis shrimp or “trung vit lon”… It sounds weird right? But yeah, we eat “bun rieu” with “trung vit lon”. Price is ranging from 18k to 40k and the opening hour is 6 am – 9:30 am 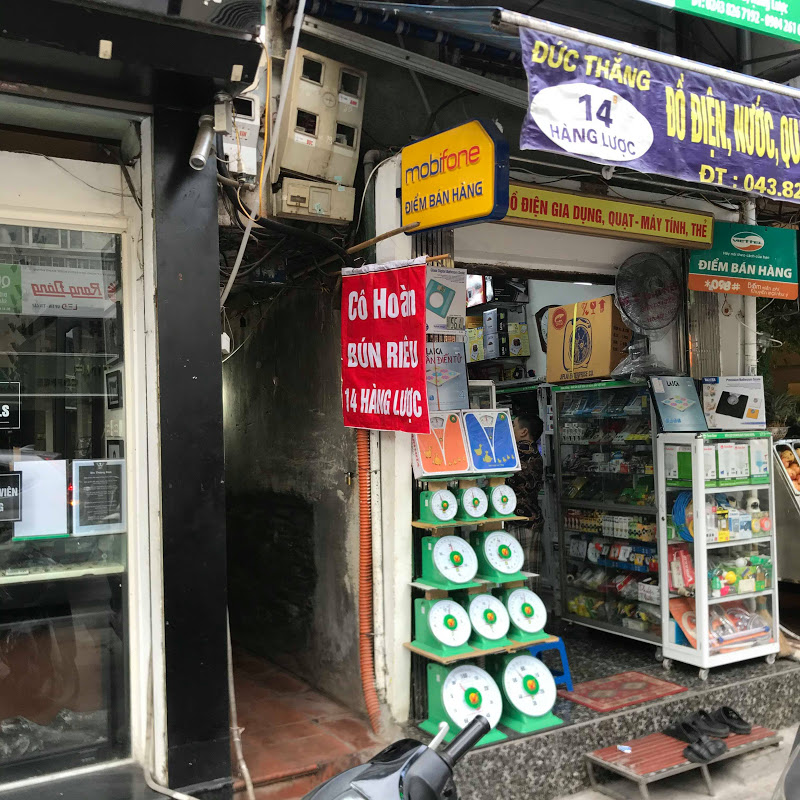 – Bun rieu cua (11 Hang Bac Str): Unlike the diverse menu of the restaurant above, they only sell the original bun rieu cua. They have a very tiny place but if you want to live like vietnamese do so don’t hesitate to squeeze in and sit on our blue plastic chair while having a delicious “bun rieu cua”. Opening time: 7am – 10:30pm and the price is affordable just 30k for a big bowl of bun rieu cua. 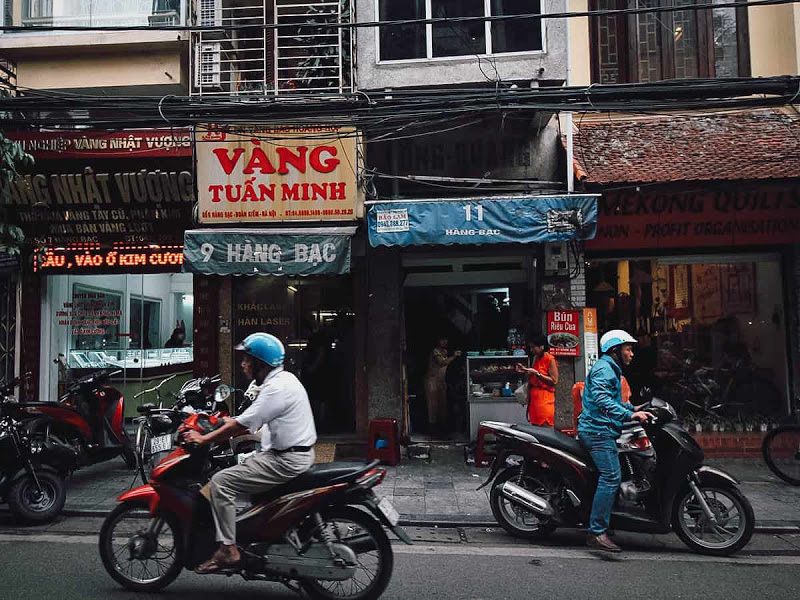 -“Cha ca” is one of the unique specialties of the Hanoi people and definitely a must eat in Hanoi. We even have a street named  after this dish: Cha ca street, so you probably can guess how important this dish is to our cuisine.  The special ingredient in “cha ca” is grilled fish, typically mudfish or snake-head fish, dill and turmeric of course!.

WHERE TO EAT CHA CA IN HANOI?

– Cha ca Thang Long (21 Duong Thanh Str): They provide a very good service: a server will set up a hot pot on your table and will bring everything you need to accompany your meal and they even keep an eye on you and make sure your “cha ca” is perfectly cooked. 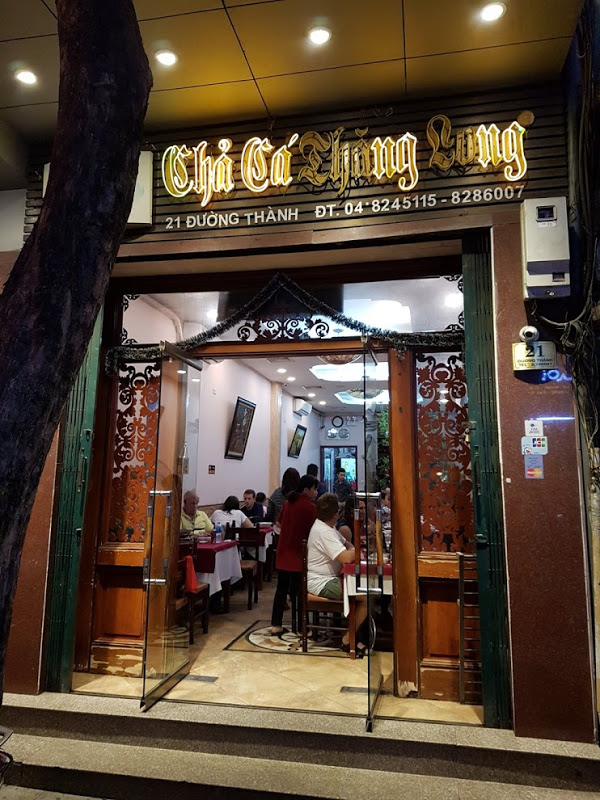 – Cha Ca La Vong (14 Cha Ca Str): It can be considered the most popular cha ca restaurant because of its history: Doan family used to serve Hanoian gourmets in French colonial time and the fish was so good that they encouraged and helped Doan family to open the first cha ca restaurant in Hanoi. 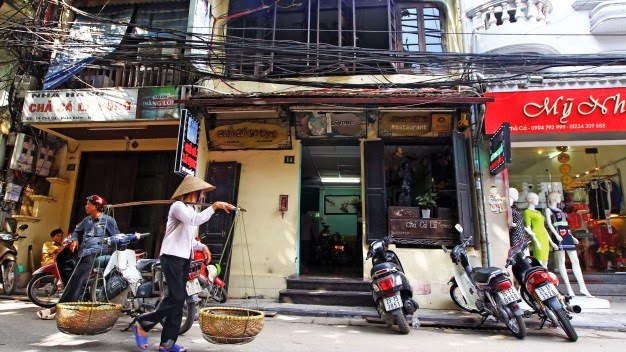 Back to Traveller Hub